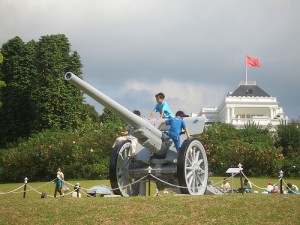 Despite being one of the most expensive places to live in the world, expats rave about Singapore. CNNGo’s Aimee Chan recently wrote a piece featuring interviews with several Singapore expats trying to pin down the appeal. The families she spoke with all highlighted the family-friendly environment, touching on topics from safety to cultural adaptation.

Victoria Great, who was transferred to Singpore in 2003, said:

As a working mum, I appreciate that I can have a full-time live-in helper to look after my daughter and support the running of the household. Singapore’s a great place to raise a family: safe, clean, diverse, and with an excellent selection of schools.

Australian expat Nicole Beath, who has lived in Singapore for 10 years and held residency for 9, told Chan:

We love that Singapore is a safer city than most. Given the strict drug laws, there doesn’t seem to be exposure to drugs in the schools. You read about kids as young as 10 selling drugs at some Sydney schools. This is something we could not see happening here. There is a clear understanding that any child caught with drugs will be expelled and repatriated to their country of origin (a contract is often signed upon enrolling your child in an international school here).

My 12- and 14-year-old daughters appreciate that they have more freedom here than they would in Sydney […] Here, we are comfortable with our children using public transport in the evenings and staying out with friends in a shopping center even after dark.

My friends in Sydney only have the choice of day care for kids under three. From 18-months-old my children are learning from a curriculum rather than just being minded. My four-year-old can now do basic reading and writing in both English and Mandarin.

Goll also told CNNGo that her three children have had no trouble making friends with local kids. “The great thing is that my children don’t see any difference between themselves and the local kids that they play with,” she said.